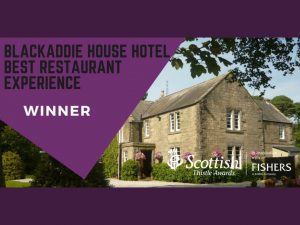 Chef Proprietor Ian McAndrew and his wife Jane are renowned for their hospitality so this is the perfect place to enjoy a romantic break, a well-earned escape to the country or a fine meal to treat yourselves.  Ian is consistently recognised as among the best in Scotland and is passionate about his dishes, expertly created, often from his kitchen garden produce.

This is such a peaceful haven in glorious countryside. Dumfries & Galloway is often by-passed as tourists whizz from London to Loch Ness however those who take a pause are amazed at its beauty and nature, views, history and fine food. Once experienced, always return.

Congratulations to Blackaddie Hotel for their Best Loved Hotels Award for the Best Hotel in Scotland 2018/19. Blackaddie will now go forward to the UK Finals.

2017/2018 – Finalist in Visit Scotland Regional Thistle Awards for Best Restaurant Experience and Ian was awarded Thistle Regional Ambassador that same year. Again this year nominated as a Finalist in Most Hospitable Hotel category.