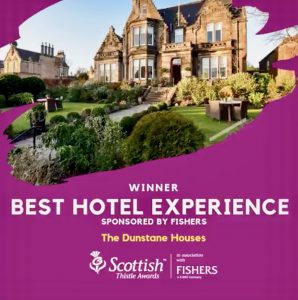 Affectionately known as ‘The spirit of Orkney,
the heart of Edinburgh’ due to the owners’ roots and their passion for the northern archipelago, its produce and culture.

The rooms are beautifully designed in a range of options and the 23 Les Dames d’Escoffier North Americans I booked in in May2018 were suitably impressed, both at the rooms they were allocated and also by the impeccable service they received. There are 35 bedrooms spread over the two buildings and Dunstane Houses won several hospitality and service awards. Samantha Wright deservedly won CiS Excellence Award 2018 for Employee of the Year.

Built in the 1860s – if only walls could talk – over the years lived in by merchants, musicians, doctors, distillers, bankers and newspapermen as the city evolved into the stylish capital it is today.

The Dunstane Houses are made up of two buildings, The Dunstane and The Hampton, directly across the road at 5 Hampton Terrace,  and together they form two halves of a one-of-a-kind boutique hotel: a relaxing, contemporary sanctuary with many design features, textiles and menu items reflecting the Orkney roots of its owners.

Food is available all day from breakfasts, lunches, afternoon teas and dinners. The Ba’ Bar (another Orkney reference) has one of the widest selections in the capital  of malts and artisan gins. The menus also reflect the owners’ Orkney origins and the island’s wealth of fine local produce: from scallops to smoked salmon; cheeses and oatcakes often feature on the menus.

Also incredibly well located for airport and transport links with stops on the doorstep!