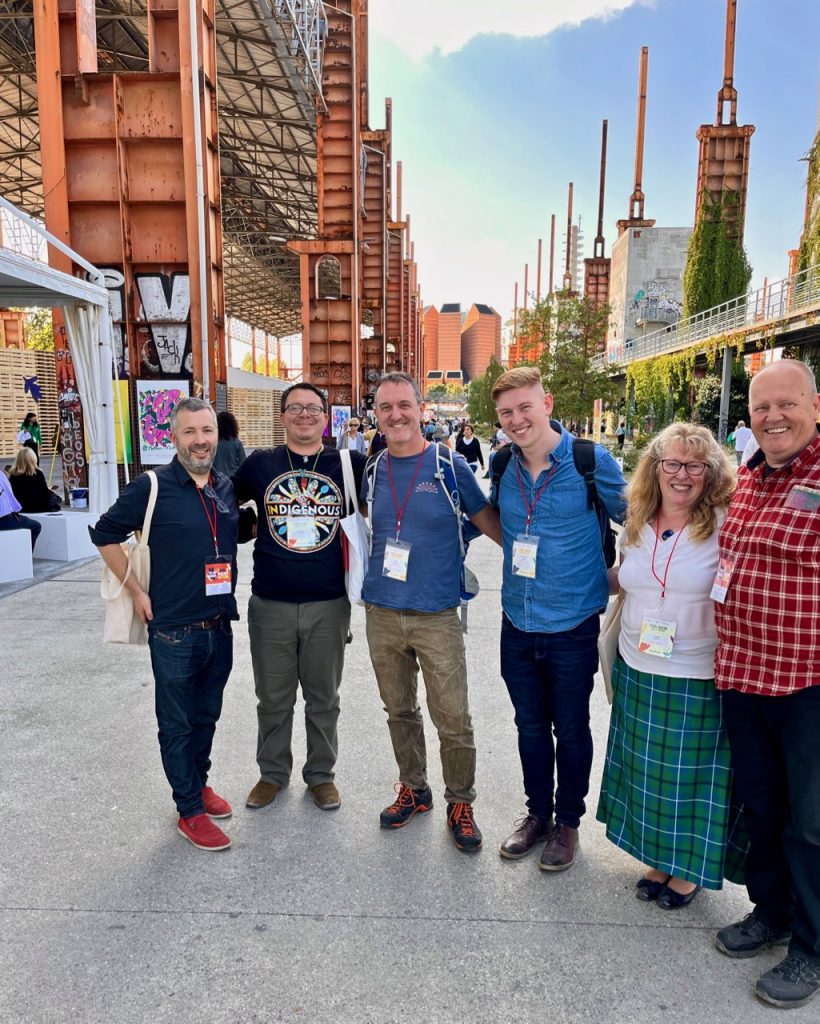 Many years ago at a formal meeting a Scottish official, who should have known better, said to me, We’re not all red-haired in tartan like a shortbread tin. I doubt his comment went on record nor whether he remembers but I shall never forget. In those days I was too naïve to retort but nowadays wha daur meddle wi’ me! And yes, I was indeed in tartan at the time – just as I was last week at Terra Madre Salone del Gusto in Torino. I enjoy wearing my clan colours: in my opinion it looks attractive, professional and is very comfortable. It sends an indisputable message that I’m flying the flag for Scotland among a technicolour rainbow of other cultures, traditional costumes and countries, all there to celebrate, learn, campaign and share the good clean fair food messages of Slow Food International and to forge further links for Biodiversity, Education and Advocacy. I think I was the only tartan present (and thankfully still with red hair) – feel free to correct me if you saw someone else.

We set off, laden with our books plus two tubs of Isle of Skye Sea Salt from the Ark (requested by our Californian SF friend) and envelopes of heritage seeds for the grain display in the Biodiversity zone. Our friend on Benbecula kindly translated the Hebridean seed names to Gaelic, as requested, to label them with indigenous names in addition to English. To say Bosse was excited about his grains being represented is an understatement.  His seed saving at Ardross was to be part of the world grain display for biodiversity: rye, black oat, white oat and bere from North Uist, along with black oat and white oat from Shetland. There were also beautiful world breads on display – something to think about for the Scottish Bread Championship next year!

After the world hit the pause button – unless you were working in healthcare or other essential services – it was wonderful to be together with a common cause.  Aisle upon aisle of Presidium producers displayed their produce to perfection: from salted capers to polished tomatoes, tiny pillows of mozzarella and bulging cheeses sufficiently giant to cause considerable damage.

There were fishes and fancy cakes, benches of giant hams and beans of every colour. I was rather envious of those beans as we don’t have them here – but then we do have Andrew Skea’s fabulous tatties so mustn’t complain. Jakob Eunson and John Castley were among the UK delegates, Shane and John from London, Nordic ambassadors from Gävle and Slow Food Scania and representatives from across the globe.

This year Terra Madre Salone del Gusto was held al fresco at Parco Dora, a giant post-industrial park and a fitting venue for this regenerative themed event. Hybrid digital and physical, some events are recorded on their YouTube channel however the tangible face-to-face meetings, discussions and tastes were well worth the journey, meeting old friends and making new connections.

With events from dawn till night, there was a plethora to choose from so here’s a flavour for you and be sure every participant will have their own tales to tell. We were invited to present our views and experiences on regeneration and biodiversity from our book, programmed as Fields of the North. It was wonderful to share our knowledge and answer questions thereafter and we thank Slow Food International sincerely for the opportunity.

We reunited with Eduardo from SF Araba Álava Community in the Basque country. A staunch supporter and always enthusiastic, he too was presenting later in the week. We first met when all delegates in 2006 and billeted at Torre Pellice. It was terrific to have a catch up on our way to the next workshop entitled The Mackerel Paradox. Presented by Norwegians, it explained the irony of excessive trawlers extracting shoals of mackerel, irrespective of size. They then sell on the by-catch of under-sized mackerel by the ton to fish farms. These dainty fish were once a seasonal delicacy, a cultural treat in their parents’ day, and they are trying to bring back this food culture as a premium product rather than a fish feed commodity that will ultimately endanger mackerel as a species.

There is no such thing as a sustainable oily fish for the mega-farmed salmon industry: herring are being eradicated from the Baltic to the point where any remaining seal population is skin and bone, and cod are starving, inhibiting their reproductive cycle. These invasive industrial fishing techniques are changing the whole balance of biodiversity. The illuminating presentation ended with a delicious treat of cured mackerel with rye crispbread.

Later in the day we took part in a Core Group round table on Biodiversity that was galvanising. With representatives from USA, South Africa, Italy, Romania, France, The Netherlands and other countries we initially discussed Ark products then it broadened into the importance of biodiversity in all agricultural practices, and indeed the blurred lines between agronomy and landscapes, farming with nature and managing marginal lands with a light touch – all forms of food production and essential for healthy soils and land management, to retain not just Ark products but also micro-life and birdsong (and integral to our book).

Shane Holland of SFUK was in fine form presenting at No Exceptions! Why we say NO to GMOs. The panel of experts explored this immense topic and without doubt everyone present learned something new. It is all pretty ominous and needs careful scrutiny and campaigning.

Over by the Press Office we were invited to a Press Conference from the Slow Food International Board. It was great to hear the words of Carlo Petrini and Paolo Di Croce again and although they are both stepping aside to different roles this year I’m sure we shall still be aware of their participation. We were then introduced to the new Board, a vibrant and diverse range of highly competent devoted people and I am sure Slow Food is in safe hands.

A Good Cheese starts with Grass sounded a promising title for a pair of cheese-lovers so we turned up to a packed marquee, greeting Ireland’s Darina Allen en route to the remaining vacant bench.  The speakers were raw milk cheesemakers from Ireland and Italy alongside a nutrition scientist. Encouraged by images of pasture and meadows from the cheese experts we braced ourselves for the dietary lecture! He commented on reducing our consumption and also showed an image of an avocado (what was that about?). We felt he could have delved more into the vital vitamins and minerals present in artisan cheese and the importance of healthy fats for children’s brain development however he did acknowledge that pasture-fed was best and grain-fed adversely altered nutrition and flavour profiles. The presentation rounded off with cheese tasting, naturally!

Parco Dora also hosted a pavilion representing the regions of Saudi Arabia and their fascinating food cultures, where we were invited to a Reception of Traditional Aseeri Dance and Tasting of Aseer’s Regional Food – a cornucopia of costumes, sounds and delectable flavours: lamb that had been cooked underground for many hours, infused with dried fruits and spices followed by a bread-based dessert delicacy combining dates and honey.

I first met Dr Amal Nemengani, Community Enablement Director for Aseer Development Authority, this summer at the Trondheim Platform and it was lovely to re-connect and delve into her own food culture. Celebrating the launch of their journey as IGCAT’s inaugural world candidate for World Region of Gastronomy 2024, there was the promise of further flavours to explore however we had to skip on to our next presentation, clutching a beautiful clay pot with spices, a gift from our hosts.

Last but by no means least, our final event for Terra Madre 2022 was From the Ark of Taste to Presidia, where each panellist portrayed one aspect of their biodiversity initiatives. It was such a pleasure and privilege to join Mara Welton who launched Plant a Seed, Share a Seed in USA, sending mixed packs of heritage bean seeds to schools to plant, nurture, prepare, cook and taste. It was impressive and colourful and a super presentation. Seiko from Japan had written a series of bedtime story books on Ark products to share her food heritage with young minds to great effect. The final presentation was from Puglia where they had created an initiative to lay down markers for more Ark and Presidia in their region. For my part I had been invited to recount the story of our second Scottish Presidium sheep The Orkney Boreray – what is special about them and what makes them Presidia. It was really positive with happy vibes and a wonderful journey through food. As we gathered to say our goodbyes, Carolina from SF HQ was there too and although I didn’t manage to say arrivederci to Elisa I say it now and to all the wonderful people we met and shared our experiences with.

If you have enjoyed this whistle-stop tour of Terra Madre you will find more about biodiversity and resilience in our book, Meadows: The Swedish Farmer & The Scottish Cook

Scottish Food Guide’s next Scottish appearance will be at The Scottish Smallholders Festival by Forfar on Saturday 22nd October so if you’re there, do come and say hello.