North Ronaldsay Mutton is highly seasonal but freezes beautifully. Look out for it, usually in March/April. It is regularly on the menu at Lynnfield Hotel on Orkney and sometimes features on the menu at l’escargot. Check out my Ark of Taste Experience if you would like to learn more.

When visiting North Ronaldsay there are daily flights and a regular ferry service. We stayed at the lovely refurbished Lighthouse Cottages at the north end of the island (pictured).  Click on same contact button to book accommodation. The lighthouse is UK’s tallest land-based lighthouse and is open to the public – an incredible view!

This booklet on these iconic sheep is downloadable free here Written by Wendy Barrie with Design & Layout by Slow Food International. A valuable tool for schools, colleges and foodies. photos © wendy barrie

The North Ronaldsay is an iconic sheep – the oldest sheep breed in Northern Europe and among the oldest and most rare in the world. According to a Danish investigation of old bones on Orkney, their DNA is 8,000 years old, as old as the origins of island agriculture itself. It is critical we do not lose this Scottish heritage. North Ronaldsay Sheep are a closed flock and probably the only flock thriving so exclusively on a shoreline, hence their sobriquet ‘seaweed sheep.’  Visit this beautiful isle and you will see these small sheep contentedly foraging along the shoreline on a diet of kelp and wild herbage whilst sure-footedly navigating rocks, sand and sea. Winter storms throw up swathes of kelp so unlike most breeds, winter feeding is not an ordeal, indeed they reach their prime weight at winter. They are sold as 3-5 year old mutton.

In 1832 the crofters wanted to rear cattle on their land instead of sheep as it was considered more profitable so the sheep were not wanted. The Laird at that time however had worked in India and had an interest in sheep. He had seen them respected and reared successfully on marginal land and so suggested that if the crofters built a sea dyke they could have both cattle and sheep. The 13.5miles Dyke (a dry stone wall) was duly built round the island to keep the sheep on the shore and off the land. This separation resulted in the preservation of the North Ronaldsay breed, preventing cross-breeding, the downfall of many other sheep breeds.

What started as survival of the fittest resulted in genetic changes that make the foreshore of North Ronaldsay and the ancient breed of sheep inseparable for their very survival. They adapted to the point where anything other than a primarily seaweed diet harms them. They are highly efficient at absorbing nutrients from the kelp and are quite salt tolerant. They have to extract trace elements such as copper more effectively than modern breeds as their access to copper in their diet is limited. This means they are vulnerable to copper poisoning if fed on a grass diet for any length of time.

Their flavour is superb and spicy, their meat dark and gamey – totally unique and a very seasonal product although of course it freezes well. North Ronaldsay Mutton is championed by Billy Muir.

There are currently 12 North Ronaldsay Sheep Crofters, collaborating on tasks to tackle intense seasonal activities, such as the gathering in of sheep. It is important to support each other – such is the way of island life. Sheep play a major part because it takes the whole island to round them up.

Billy Muir, the Producers’ Co-ordinator is a third generation crofter on his farm. Known as the man with 20 jobs, he was presented with Winner of Pride of Britain Community Award in 2016. Billy’s unstinting service to North Ronaldsay includes firefighter, shepherd, lighthouse keeper, tour guide and airport worker. He is a Member and former Chair of North Ronaldsay Trust and Director at Northern Lighthouse Heritage Trust. We have him to thank in no small part for the survival of the North Ronaldsay Sheep.

Also wonderful yarns available in a range of natural shades. There is a shop beside the lighthouse. 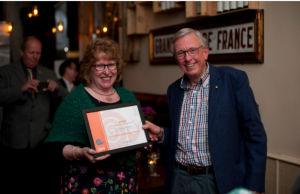 Thanks to the Connect Local Fund for their support in some of this research.